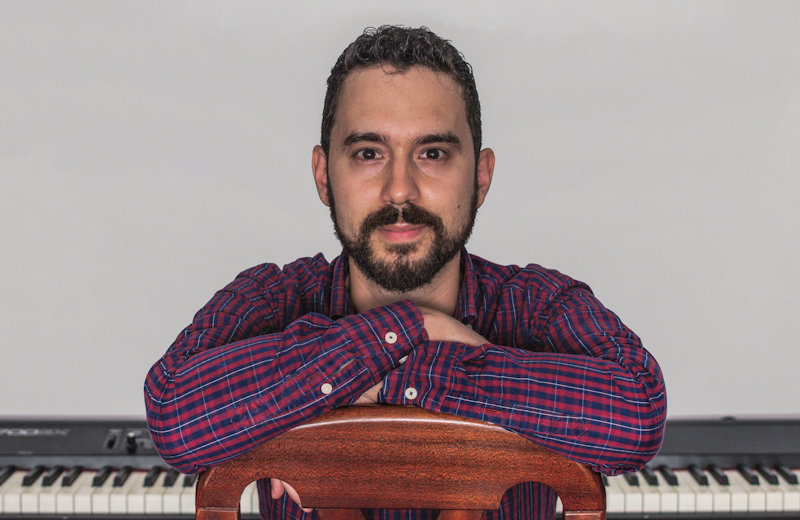 Born in Lisbon in 1985, Miguel Diniz graduated in piano and also in composition in Portugal. He finished his master’s studies in composition, being awarded the Outstanding Achievement Prize by the School of Performing and Digital Arts, at Royal Holloway, University of London in the United Kingdom.

Developing an intensive activity as composer and arranger, his portfolio includes music for soloists and ensembles in different instrumental and vocal configurations. Some of his latest works include Requiescat for choir and guitar quartet, recorded in CD by Coro Autêntico and conducter Gonçalo Lourenço in 2018, his first chamber opera Multidão: II-Vera (“Multitude: II-Vera”), Mar Português (“Portuguese Sea”), commissioned by Coro Anonymus, A Glimpse of Stars for viola, bass clarinet and piano recorded at Abbey Road studios in London in 2019, Leonardo’s Legacy for orchestra, commissioned by conductor Peter Le Tissier, Sono (“Sleep”) for choir, commissioned by Associação Cultural Cantar Nosso for a program dedicated to contemporary Portuguese composers, and Novos Horizontes (“New Horizons”) for solo saxophone and symphonic band, commissioned by Banda Sinfónica da PSP. In 2018 he was chosen for the Picture Gallery Composer-in-Residence scheme at Royal Holloway, University of London, creating a work for the school’s Gamelan Ensemble Puloganti and voice entitled Mixed Waves. In the following year he began his work as a media composer with the soundtrack for Julia Negretto’s short film The Starry Night, with his most recent work in this genre being developed in The Isolation Project with music for virtual ballet.

During his first job as an accompanist at Vocalizze (international choir and choral conducting masterclass in Portugal), Diniz developed an interest for conducting and has been working with several choirs and instrumental ensembles in the past eleven years. Since 2009 he has been a music tutor in Portugal in disciplines as piano, composition, choral conducting, choir, orchestra and contemporary ensemble working with ages ranging from 5 to 64 years old. Making use of his initiative and leadership skills he created several ensembles at the conservatory in Santarém (Portugal), including a youth choir with which he premiered several original works written especially for them, a chamber choir dedicated almost exclusively to 21st century music, a mixed instrumental ensemble, and a contemporary music ensemble, a group that has premiered several works by himself and other Portuguese composers, including Diniz’s own composition students. At this school he developed an internship program for choir and instrument students of all ages, to which he wrote ten concert-long medley arrangements for choir and orchestra, based on music by artists such as Queen, Michael Jackson, Beatles, ABBA, Coldplay, Muse, Disney among others. At the same city he also developed independent groups such as the vocal ensemble Exordium and the chamber choir Coro Voar das Artes.

Diniz is currently writing a new cantata for choir and ensemble commissioned by Associação Cultural Cantar Nosso, while also developing his PhD research in the use of movement and light as intrinsic elements in the composition for choir and vocal ensembles. Based in London and with an extensive experience working with software as Sibelius and Logic Pro X, he works as a freelance composer both in western art concert music and media music, while keeping part-time jobs as the conductor and artistic director of Coro Voar das Artes in Portugal, and as music tutor for MTech in London and Ars Música in Santarém (Portugal).